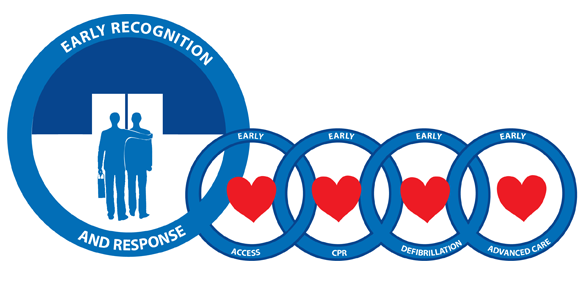 The Addition of the Fifth Link in the Chain of Survival to Include Myocardial Infarction:

The Chain of Survival metaphor was introduced in late 1987 by Mary Newman, a member of the board of directors of the Citizen CPR foundation and a member of the planning committee for the 1988 conference on Citizen CPR. The Chain of Survival was first printed in a JEMS editorial in August, 1989 and later in the first issue of Currents in Emergency Cardiac Care in 1990. Since that time the Chain of Survival metaphor has been promoted as a public health message that helps to emphasize the urgent steps and teamwork needed in emergency cardiac care. Its primary purpose was to address cardiac arrest and the emergency steps needed to carry out a successful resuscitation.

Initially there were only three links. They included Early Access, Early CPR, and Early Defibrillation. Later the Chain was modified to include the fourth link, Early Advanced Cardiac Life Support (ACLS). Mary Newman had predicted this as well as a fifth link that would include Early Recognition and Subsequent Response.

Since the original metaphor was designed, the Chain of Survival has been expanded to include not only cardiac arrest but also acute myocardial infarction as well. Unfortunately the Early Access link just does not do enough to address the early stages of acute MI. The Chain of Survival is perceived by many as an emergency chain whereas 50% of patients presenting with myocardial infarctions begin with mild stuttering chest symptoms not perceived as pain or emergency enough to seek out hospitalization. To reach out to such individuals it is important that a fifth link be added to the Chain of Survival that would emphasize Early Recognition and Response of an acute myocardial infarction as a preventative measure that would interrupt the cascade of events leading to the crashing MI and subsequent cardiac arrest.

Most importantly, adding the fifth link would place a great deal of emphasis on community awareness programs for beginnings of heart attacks and shift the paradigm away from the crashing events to preventative measures. It would greatly increase salvage rates in that the usual high mortality seen with cardiac arrest could be shifted to a higher survival rate seen with intervention that would prevent death and heart muscle damage. It would give good reason for chest pain to be considered a risk factor for acute myocardial infarction. Surprisingly, chest pain is not presently considered such a risk factor. Yet obesity and serum iron have recently been added to the list of cardiac risk factors. It is important to recognize that risk factors for the development of coronary artery disease may differ from risk factors that take place when the patient is the midst of having an acute myocardial infarction. Once chest pain is considered a risk factor for acute MI, we may be able to see clearly that it is not chest pain per se which is the risk factor, but the chest discomfort that precedes the chest pain, which is the culprit. The individual usually does not seek early entry into the medical system for this mild discomfort because it is not painful enough and occurs intermittently, thus deceiving the individual. Thus developing the concept of chest pressure occurring before chest pain is analogous to the "smoke before the fire" message. It lends itself in presentation as an awareness program which could be easily understood and acted upon by the community. Furthermore, future CPR programs should be combined with this early recognition and response message with equal time being given to both.

Thus what is being proposed is a new strategy as we revisit the Chain of Survival metaphor which has become accepted as a symbol for emergency cardiac care, and add to it this important fifth link that would shift the emphasis to early recognition and response of the acute MI allowing us to provide preventive measure with the greatest potential for beneficial results. Doing so will allow us to nip the heart attack in the bud stage and will allow us to shift the emphasis to awareness programs in the communities to maximize and optimize our attempts to significantly reduce heart attack deaths.